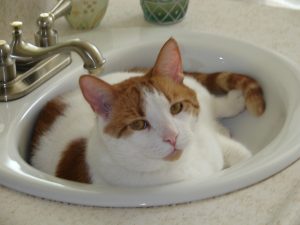 Piev hopped into a member’s backyard one cold, wet, rainy night in winter looking for food. Noticing that something was very wrong with his hind leg, a CC4C member set out to trap him. After three nights of feeding, she succeeded and the next day, a visit to the vet revealed that he had an old injury that left his hind leg badly broken in several places and it had healed improperly.

Piev was full of fleas, dirty, had Bordetella (more common in dogs), and was covered in pink “mast” cells due to living outside in the sun and being a mostly all-white cat. All pre-cancerous mast cells were removed; he received antibiotics for the Bordetella; was bathed, de-flead, de-wormed, vaccinated and neutered—and was practically a new cat!

In October 2012, Piev was finally adopted after over two years living with his rescuer, by a wonderful woman in Oakland. She was looking for a “special needs” cat that needed a home that would provide an abundance of love and attention. She understands Piev’s limitations and in order to provide for his special needs–has moved her chairs next to windows so Piev can look outside at life going by–like he loves to do so much. She’s purchased several cat beds, to provide comfort wherever and whenever he wants to rest, and brushes him every morning before going to work, because Piev doesn’t have the ability to scratch himself–so she does it for him.

We’re so happy that Piev has found the perfect home and we wish him all the best!