**Thank you, everyone! Tiger’s medical expenses have been covered and he has a home!**
Tiger is big gorgeous orange tabby with an exotic face. Tame and microchippped – but not registered! — he was dumped at a feral colony years ago. The colony caretaker has been slowly trying to foster and adopt out the tame cats, but adopting out adults takes a long time.  In late January Tiger was injured. By posting to Facebook, we raised donations to cover his medical expenses and also found Tiger a home– and his buddy Angel got to go with him!

Tiger abandoned at a feral colony

Wed, Jan 28: “Well Tigger’s brother (Tiger) is at the vet’s. I got a call from Big Mike that he didn’t show up for food this morning which isn’t normal. He’s a wet food junkie. I went crawling around through the bushes and found him in obvious pain and he couldn’t put any weight on his front right leg. So I grabbed him and put him in a carrier. He’s got a terrible abscess in the upper right shoulder/chest area and he’s in surgery now. He’s also got a terrible URI so I’m hoping he is strong enough to make it. I will let you know. Poor guy. He’s a love bug who crawls in my lap and gives me love bites (which is why I haven’t pulled him) and I know most folks don’t understand that they are a sign of ultimate love and affection. I would love to find a home for him after he heals, but I know that would take a miracle….” 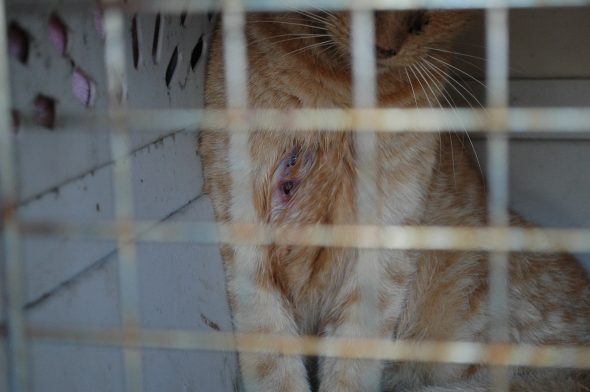 Fri, Jan 30: “He came back Wednesday night and is recovering in my TNR cage. I wish I had some place warmer for him to stay but I don’t. I had to scramble to make a makeshift cage for Lady Jane. Poor Tiger is scared and just feels lousy you can see it in his tired orange face. He’s exactly like Tigger. He’s already been in my lap and rubbed me up one side and down the other. Poor guy he’s so congested and obviously doesn’t feel good but had to give me love and ram his head under my chin and into my arm. He’s so sweet. And of course he gave me a customary love bite. Sigh. He’s gentle about it, but he does do it.”

Fri, Jan 30 afternoon: “Oh, I forgot to tell you, he came out of his carrier and gently laid his head in my lap and looked up at me with his weepy eyes and congested purr. It was just too special. Of course that now begs the question, what do I do after 2 weeks of healing? Angel never came out of the carrier the whole 2 weeks he was here. Tigger did immediately and so is Tiger doing the same thing. To put back a friendly cat back in the danger zone after spending all this money to get him well is going to be emotionally very hard to do….”

Sat, Jan 31: “Today was one of those days that brings tears to the eyes of any rescuer who watches a homeless cat enjoy a blanket for the first time. Tiger has never had a blanket or anything soft, just dirt and hard wooden pallets to sleep on. Today I took out the puppy pads that were in his carrier after surgery and gave him a clean soft fleece blanket. He immediately started to purr and make knead and then laid down to rub his head on it and enjoy the softness. Then he fell asleep. Such a simple thing as a blanket, that’s all it took to bring joy to Tiger today.”

Mon, Feb 2: “Tiger who has never known softness in his whole life is growing protective of his blanket.  Whenever I reach into the carrier to try and straighten it out he gets fearful that I am going to take it away so he runs in and starts to knead on it and swats at my hand.  Then he lies down and buries his head in the blanket and rolls and rubs his face in it.  He’s never felt such softness you can see that in his tired grateful eyes.   I know how this will sound, but today I swear that I saw a tear in his eye when he thought I was going to take his beloved blanket away.  So I just patted him on his head and sat with him in his cage until he tired himself out kneading and fell asleep.  I can only wonder what he would be like if he ever got to sleep on a comforter on a real bed.  That’s my prayer for Tiger, for him to find a home and never again have to be cold and sleep in the dirt or on a wooden pallet.  For him to never be parted from his beloved blankie.”

Tiger with his beloved green blankie

Tues, Feb 3: In less than 1 day, generous donors covered his medical expenses and then some! In addition TIGER HAS A HOME! Thank you all so much! Your generosity and kindness to Tiger has been overwhelming and so very appreciated. While I was at work, I had three people contact me about Tiger. The first already knew the pres of our group and got in contact with the rescuer directly. And two others also offered Tiger a home! The rescuer is overjoyed– you are all so wonderful for helping Tiger. Truly, this means the world to us and to him! We’ll continue to keep you posted on his recovery, he’s still healing and not ready to be moved for a few more weeks. Thank you!

Wed, Feb 4: “Tiger’s wound is healing nicely, but he still has a bad URI which has me concerned.  Gabi (his adopter) will be coming to visit him on Saturday.  I hope she understands that she isn’t just adopting Tiger, she is adopting a blanket as well.  Tiger absolutely refuses to leave it and just completely buries himself in it.  Maybe we should have a contest to name Tiger’s blanket?  <grin>.” 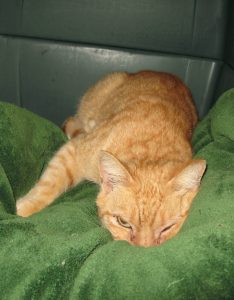 Truly, he loves his blankie and it’s going with him to his new home when he’s all healed up

Feb. 15: “Pictures from yesterday’s trip to my colony that is in danger.” 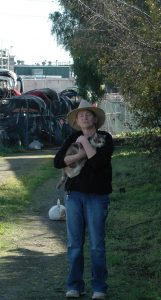 Me holding Felicity (she’s so sweet)

Feb.16:  “The boys are together again, never to be parted. As soon as I brought Angel into the garage he started crying and immediately Tiger answered him. Within 5 minutes Angel was out of his carrier and in with Tiger. Although I’m not sure Tiger is thrilled about sharing his beloved blanket… Angel sure is enjoying the softness and started to clean himself and then closed his eyes to take a nap after a stressful day of being rescued. I’ll start working on getting some meds into Angel to clear up his URI.  Never again will anyone kick or hurt either of these lovely cats thanks to Gabi and Jorge.”

Feb 20: “Tiger and Angel are at Gabi’s.  Angel has already started to come out of the carrier and explore the room.  Tiger is not that brave yet.  Angel is the dominant one between the two of them.  Fingers crossed it all works out ”

Feb 21: “If this doesn’t make you smile, nothing will.  Angel already has a girlfriend in his new home.  Scout, a former feral herself, has befriended Angel and is showing him the ropes at his new home.  Tiger however is still scared and under the futon.  Both Angel and Scout are trying to get him to come out, but no luck yet.

Ahhh that Angel, a smooth one with the girls <grin>.  He was voted most eligible neutered bachelor of 2014 in Play Cat Magazine.

I’m so happy for these two.  If only we could do this for all of them still out there in danger.”