This is long overdue for me to write… 2012 was a challenging year for me– three very sick cats all at the same time, at my work.

Boots was very sweet and friendly but had litter box issues and was unadoptable. She came down with the signs of an upper respiratory — congested, weepy eyes, harsh breathing. I scooped her up from work, took her home and gave her some antibiotics for two weeks, which seemed to clear it up, so I put her back out.

About the same time, co-workers at our warehouse called to say a one-eyed black cat had shown up. I wasn’t in a position to take her home with me and she seemed to settle in with my co-workers fine– they set up a litter box, food, water, and a bed for her, and she’d hang out on top of the counter by the computer. They named her Winky. Her eye socket looked fine– not sure when or how they eye was lost.

Boots came down with symptoms again but avoided me, so I asked another feeder to grab her on the weekend. I was off hiking in Yosemite, but she called to say she got Boots and would take her to the vet– and there was a new cat, orange, skinny, and limping, probably with a broken leg!

When I returned to work on Monday, I went over to the feeding sight, was able to scruff him and put him in a carrier. I called Montecito and asked for an emergency appointment– and they squeezed us in between other clients. Dr. March confirmed he had a broken leg and told me to bring him back the next day and they’d do the surgery immediately. I blogged all this on Facebook, as I tend to do, and asked friends to suggest a name… and that is how Chance got his name. 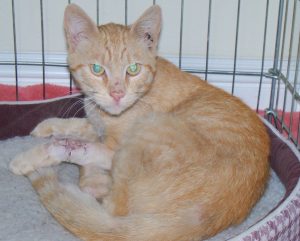 Chance right after his surgery to pin his broken leg bones together.

Chance only weighed 7 lbs and both bones in his leg were broken clean through. Dr. March told me they had lapped over each other and she had to pull them back into alignment and pin them to heal properly. Chance was so skinny, I think I fed him 4 cans of wet food a day plus left kibble in with him all day. He was confined to a cage for the first month to keep him off his leg so it would heal properly. Then I let him have the bedroom, and he’d hop around on three legs. Despite everything he’d been through, Chance was a total love with a big purr who loved to be petted and snuggle. He was still playful and would bat a mouse around the room with his bum leg. He couldn’t put weight on it because of the pin, which was removed after two months and a few x-rays to make sure it was healing properly.

Once the pin was out, I let him get use to that then started letting him out in the rest of the house. It took him about two weeks to realize he could put his leg down. He loved to play, would wrestle with my cats, snuggle with me on the couch. Such a good boy!

The second weekend at the adoption site– his forever family walked in! They wanted an orange tabby and friendly. They had an older female cat who was a bit uppity and not very affectionate. Chance, on the other hand, loves attention and would hop into my lap to stretch out for a nap. They had a big dog– a 2 year old bull mastiff (HUGE) who was very sweet. Chance played rough with my cats so I figured he needed to go home with a big cat or a dog– so he got a big dog instead. Took him a couple of months to get comfortable with Tabitha (who just wanted to lick him). The last picture I saw was Chance, cozied up sleeping against her tummy, while Tabitha was sprawled on her side.

Chance got a Second Chance thanks to CC4C! 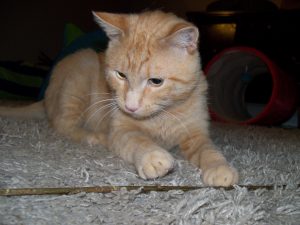 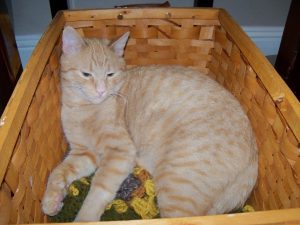