A little feral colony started to develop in a Concord neighborhood. Thankfully, two neighbors took note and started to help them by fixing the adults. When three little kittens wandered into Daphne’s backyard, she scooped them up and brought them inside. The little gray kittens were about 6 weeks old and she fostered them in her home office and took them to her vet. At about 10 weeks old, she reached out to CC4C for help in finding them forever homes.

Daphne told me one was a bit shy and holding back, and conveniently a retired co-worker had called me that same day wanting to foster a kitten for a little while. So Minerva was split off from her siblings for some one-on-one for a couple of weeks. Gail did a wonderful job with her– it was her first time fostering and a skittish kitten is a challenge. But after a couple of weeks when I reunited her with her siblings at Daphne’s, I could see a huge difference in Minerva. It is often best to split off the shy kitten from the rest of it’s litter like this so that it has to bond with people and socialize.

We got the kitties fixed, tested, finished their vaccinations and worming meds… kept showing them at adoptions for many months. While they are beautiful kitties, the right home didn’t come along until November for Simon (formerly Dash) and Willow. Their new mama had this to say…

Nov. 18: “They slept well and are already coming to me.  Especially Dash aka Simon. They seem to be settling in quite well. Thank you guys for all that you do.  Without your work I would not have been able to give these precious little ones a home.  Please let Daphne know they are in very good hands. She looked a little sad yesterday.”

Nov. 19: ” First of all, I am so thrilled that Dash/Simon & Willow have found a good home, and all looks good so far that this will be their forever home!  I just want to let you know that we can’t believe the change in Minerva. Since coming home Sunday, she has been following me around the house like a puppy. She hates being alone in the room so we let her have the run of the house when we are home. (I can’t risk having her escape thru the pet portal when we are away.)  She now lets me pick her up a lot more and even comes and snuggles with us on the couch! She is probably always going to have that jumpy/defensive side but she is definitely adoptable.”

Their new mama contacted me a few weeks later asking for some advice; conveniently she lives just down the street from me so I offered to come over in the evening. I gave her a few pointers and was very pleased to see how well they were settling in.

Dec. 3: “Well well well. You are officially the kitty whisper in my book. Simon and Willow have both been coming up to me tonight. Simon just got up on my lap and sat down with lots of petting and purring. Your visit made such a difference. Thank you again”

A month later, Minerva’s lucky day came along! A young couple came in, asked about her, but she wasn’t there that day. I called Daphne, who was returning from the airport with her son for the holiday break from college, and she said she could be there in an hour. The young couple lived close and said they’d come back… and they did! The young couple had experience fostering shy kitties before and understood kitties who approached on “their terms.” By the next day they already sent an update…

Dec. 15: “Just wanted to give you a little update on the kitties. Minerva is doing awesome, she eats in front of us, she’s purring when we pet her, she ignores the dog and doesn’t mind the baby. She’s already exploring and found her favorite spot on the couch.”

Dec. 17: “Minerva is doing great, she’s still a little shy but opening up a lot, she’s already playing with little mice toys and scratching on the kitty tree. She gets more interactive each day.”

I let Simon and Willow’s new mama know that their sister found her forever home too, and they have continued to settle in as well!

Dec. 23: “Simon and Willow are adjusting quite well and seem happier every day.  I’ve been reading a lot about feral cat behavior which has helped. They are both now sitting on my lap in the evenings (one at a time) and they like playing the cat fishing application on my iPad. So funny! I’m happy to have adopted them. They are providing a lot of company and make me want to stay home all the time.  I look forward to coming home to them and waking them up first thing in the morning. They have met several of my friends and each time have stayed in the living room and played with visitors. They definitely got treats for being such good kitties. No more scratches either.  Both times they were afraid and trying to get away from me. I have learned better how not to accidentally scare them and suffer the repercussions!  They really are precious.”

A very happy ending for all three siblings! A big huge thank you to Daphne for patiently fostering them for almost 5 months until they all found their forever homes.

Jan 2015: “I moved to Raleigh NC and I worked with civic feline who boarded Willow and Simon while I was moving and went into a hotel for a week.  Then they medicated them the night before and the day of the flight. The vet techs said it took three of them to medicate Willow and they would suggest I never try it by myself.

We are all settled in. I bought a new home that is triple the size of my little rental in Walnut Creek.

Willow and Simon trust me more each day, especially after the trek across country.  I did the same thing. Set up a safe room for a few days and let them tell me when they were ready to come out. We got here late Friday night and it took a few days but they slept with me last night. Quickly adapted.

It’s been a challenge with them but Simon is a big lap cat. They follow me everywhere and they still are best friends.  Both are very loving.  The only time they scratched me was when I startled them and they were trying to get away from me. Not aggressive at all. So rewarding to watch them trust more and more.

I’ll send a recent photo in another email. Keep up your good work. “

Willow sleeping on the bed a few days after their big move. 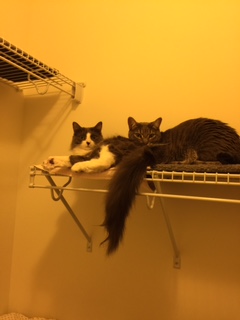 In their new home, Willow and Simon found a safe spot in the closet high on a shelf.