As a cat rescuer, I obviously care a great deal about helping cats and I have a big heart. I fall in love with all my fosters– the easy ones, the quirky ones, the challenging ones.  I will admit, it is a little bittersweet when they are adopted because they all hold a special place in my heart. However, I can’t keep them all so I am always so very happy when the right home comes along for them.

There is one location that I have been helping at for three years. Some of the neighbors  are more concerned about the stray and homeless cats than others, some are kind but unreliable. Either way, there are many that need help. I first got involved because a woman asked a few questions at our adoption site about where a product was in the store… when we got to chatting I learned that she had rescued a mama with four baby kittens from the ivy and one was missing his back foot. I promised to help her, but I couldn’t take them because I had kittens recovering from ringworm at my house. A few weeks later, I found a foster through a Craigslist ad who was willing to take in all of them. After three days she e-mails “hubby wants to keep Stumpy” the one missing a foot, and they kept the sister. Whisper, Lady Bug, Stumpy, Charlie and Tigger all found wonderful homes. I also rescued another adult later that year, Luigi, who got a fabulous home– big huge awesome tuxedo!

The next year, the original person I helped called me again… she found another kitten who was very sick and more were coming around. The sick kitten was taken in by Civic Feline and one of the vets kept her (although she had to have an eye removed). I gave the woman traps and figured we’d start doing trap-neuter-return. We fixed some but she kept trapping cats with clipped ears– a sign they have already been fixed as a free-roaming cat. Upon further investigation, we discovered a colony of over 30+ cats, many already fixed, but there were still kittens about. I ended up taking 18 kittens from there, many sick with an upper respiratory, and with the help of another CC4C member got them into foster homes and adopted. We continued to trap and fix another 9 adults and I pulled one very friendly snowshoe, Charles (now Reagan).

I knew we hadn’t gotten all the adults, but we weren’t having success trapping them because of fences and other physical barriers. So this year, I got another call– three more kittens and a mama plus a few other adults. We quickly trapped two kittens, Henry and Bridget, who were older than I expected– about 4 months. Thankfully, they were not feral! They had been fed with the other stray cats so they seemed to trust people. Henry was purring up a storm in no time for me, although Bridget was more reserved and skittish.

Bridget was quickly adopted by a woman who recently adopted another kitten from me a few months before. Jingo needed a buddy. She was renamed Berry and we worked via e=mail for several months to continue her socialization since she had some defensive instincts from surviving outside.

“I just spent my second night with Berry sleeping right near my head all night long, no treats involved. I’ve never had a cat who wasn’t totally promiscuous with its love so Berry is something new for me but I have to say, it is even sweeter to get love from her since it isn’t given lightly. Ayyyyy, I love this little girl so much!! She brightens Jingo’s world and mine. I can now say unequivocally that she was the perfect choice and I’m so grateful she is the one I ended up with. Thank you so much for your help and suggestions with taming her. There is more work to do but there’s no question anymore that she will become a totally tame and totally affectionate cat and I bet she is going to end up being even more affectionate than Jingo. She loves being petted sooooo much. Thank you for bringing these two wonderful kitties into my life. I’m so grateful for them, and last night when the wind was blistering so badly I was so glad that Berry and her brother are safely off the streets and in warm houses instead of out in that wind. Thank you for the work CC4C does.”

With patience, Berry has blossomed and is very well loved by Jingo and her human!

“It’s true that I love the really friendly kitties, but I love Berry like crazy, and she isn’t exactly a lap jumper to start with. I feel so lucky and grateful to have her. She lights up my life! And when she plays with me it is adorable! She just looooves to play, but she bats at me in this delicate, dainty way. It is adorable!”

Henry continued at my house– full of personality, a huge purr, tail up and confident! He watched other foster kitties get adopted — Pepper and Hewy — and another one come in — Izzy Heart. Despite his handsome looks, it took a couple of months for his forever home to find him. He started getting fussy at adoptions, so I put him on a leash and harness– and he loved it! I took some video and — magic — got several calls and e-mails quickly! Thanks to him, he also got Sprout and Midnight their forever homes.

“Henry and Ringo are now playing together and they had their 1st meal this evening. Henry is sleeping next to me on the couch right now.  He’s such a sweet kitty.  We just love him so much and I think he makes Ringo very happy too.” 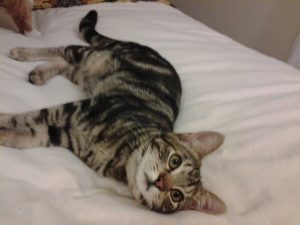 And thank you to all our friends on Facebook who have followed Henry’s journey, along with my other foster kitties since I plastered them up there all the time! Happy Holidays to all!