Their rescue story… Snow and Ice were rescued from a house undergoing renovation.  They were picked up young enough to tame down nicely.  It wasn’t obvious at first that Ice was blind, but after having them a few days, the rescuer saw Ice circling the crate.   She noticed that he couldn’t see his food bowl.  And he seemed depressed.  His litter-mate, Snow, is his best friend and takes care of him.

Happy New Year! Thank you for the email and for sharing the 1 year Rescue Anniversary date and baby photos of Snow and Ice. They are so cute. Terry and I absolutely adore them and we are so happy they are a part of our family. They have settled in nicely. Ice (who we call Joey) took a little bit longer than Snow (who we call Zoey) to get comfortable, but now they can not get enough of the love and attention we give them. Joey seems to get around just fine, and if anything I think his vision has improved. We occasionally have fruit flies, which he loves to chase around the house. He also still loves to climb and is an expert at opening cupboards and drawers. You are right – Zoey is our eater, and a rather picky one too. He is also loves to relax and sleep in the sun.

Their relationship with one another is adorable. They are indeed best buddies and I can see why you wanted them to be adopted together. I too have attached a couple of photos so you can see how much they have grown. It is amazing how much they have changed since we adopted them in July.

Joey climbing on our bikes – December 2014 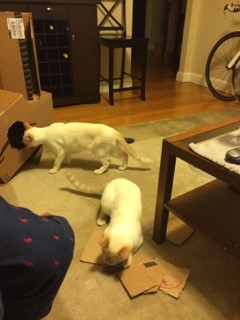 Loving each other January 2015

Nice to hear from you. The babies are doing well. It has been an adjustment for them, but we see progress everyday. Snow is quite curious and playful. He initially was very shy and uncomfortable around us, but he grows more comfortable by the day. He loves to play with the bell toys and relax on the couch in the evening. He does not allow us to pick him up yet, but he is slowly approaching us and allowing us to pet him. We have gotten his motor going a few times.

Ice is comfortable, but is not ready to be social. He enjoys us talking to him and he seems very interested in playing with the bell toy. However, he spends majority of his time when we are home either under the bed or couch.

Both cats have shown increased comfort with time, just at different rates.

For the first week we videotaped them while we were at work to ensure that they were both eating and taking care of themselves. Both of them were extremely comfortable when we weren’t home. Snow now eats and does his duty no matter if we are home or not, but Ice waits for us to leave or sleep.

Overall they are adjusting and we have really enjoyed watching their development and learning their different personalities.

Great to hear from you!